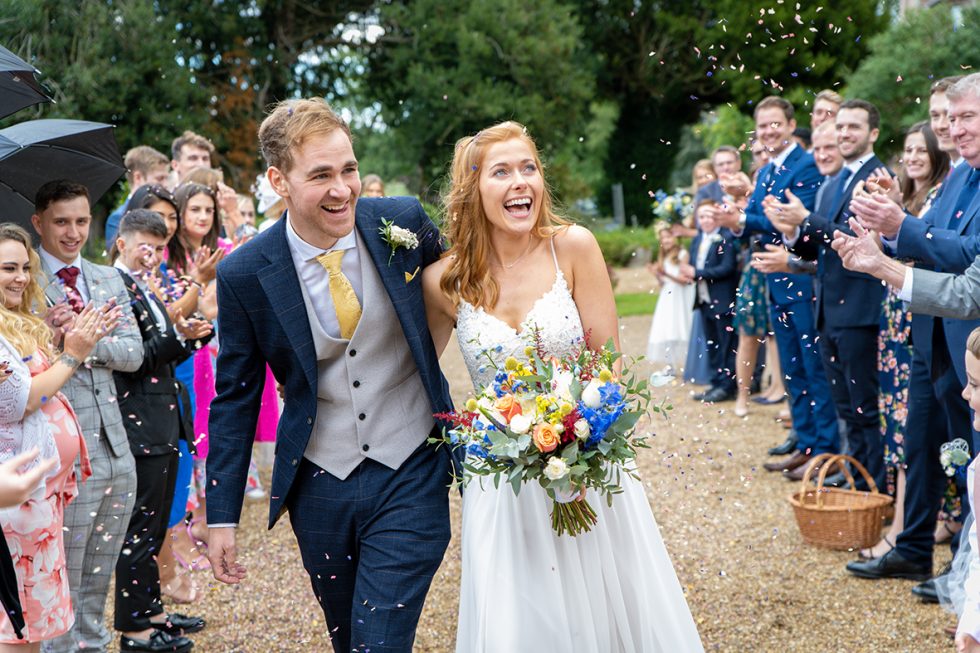 Melissa & Dan’s arranged their whole wedding during lockdown. This might seem like perfect timing because you have lots of time on your hands. However it means arranging everything via email, phone or Zoom calls. Yet they managed it & did a fantastic job in creating the most beautiful wedding. The fact that they started with Stanlake Park as their venue meant they were on to a winner straight away. The vineyard locations is idyllic. There are beautiful spots for photos everywhere including the stunning walled garden.

Melissa & her bridal party got ready in The Bow loft, they arrived from her house by VW campervan which looked fantastic in front of the clocktower. They chose to have their ceremony inside the Coach House, but with it being a beautiful October day, they had the doors wide open to allow the fresh air in. After the ceremony they had their drinks reception & most of the group photos in the walled garden.

Melissa & Dan wanted a few couple photos, but they really wanted some fun pictures with their bridal party. So I took the bridesmaids & groomsmen along with Mel & Dan via the walled garden into the large vineyard. Here we took some really fun photos & they all had a great time.

Their wedding breakfast followed this in the Vineyard Barn, they had beautiful lights by Academy, a main cake made by Melissa’s cousin & loads of stunning, flower inspired cupcakes made by Melissa’s friend. Their clever table plan was made up of polaroid portraits of each guest entitled ‘Match your Pretty Face to a Table Space’ & their picture had their table number on the polaroid. They used Stanlake Park wine corks as holders for each place setting & has a selection of colourful flowers on each table to match the brides stunning bouquet. The speeches were hilarious, with the Bride, Melissa having the final speech. The evening reception was kicked off with some limoncello shots & some excellent music from band Happy Hour.

Dress – Bride To Be of Reading